Coupling is a commonly ignored systematic error in 4D inversion

4D acquisition and processing are ‘coupled’ by nature, meaning that parameter selection takes into account all survey vintages. In addition, processors are trying all possible ways to honor the coupling between vintages and surveys with innovative co-processing workflows and algorithms.

However, most 4D quantitative interpretation workflows, such as 4D inversions, are not coupled, resulting in high S/N ratio and poor interpretability of the 4D inversion results.

There are two approaches that are classified as uncoupled 4D inversion, which are independent inversion and direct inversion of 4D difference. 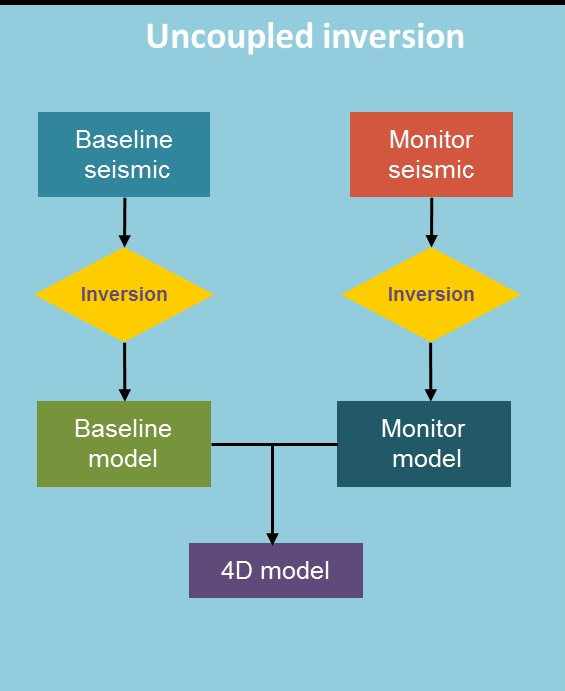 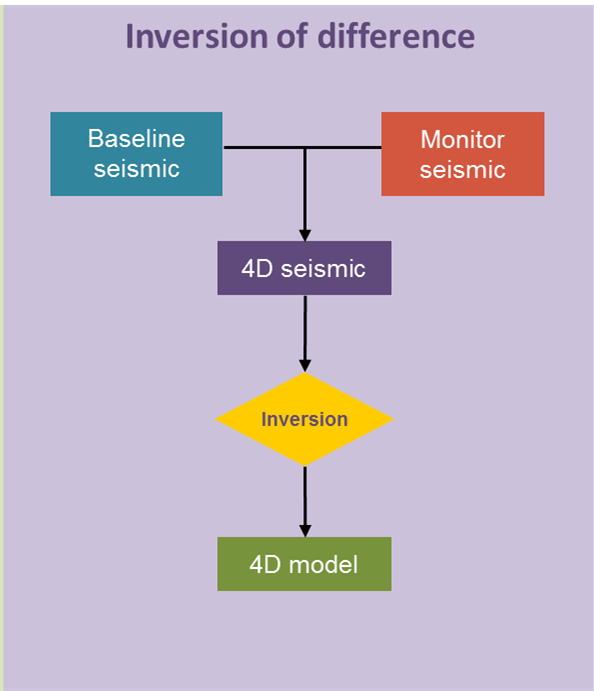 It has been through a lot that the processors endeavor to defend the repeatability and quality of the seismic data. However, the uncoupled 4D inversion, as the last step of exacting the 4D information from the data quantitatively, is very often carried out with systematic bias/unrepeatability by using uncoupled approach.

An experiment tell you why uncoupling is so bad

How does the uncoupled approach introduce additional error to your results? Use the following experiments to explain:

Below are two cases of 1D “reservoir” going through gas dissolution where impedances decreases (softening). Case A, from (a) to (c) represent a reservoir rock that is originally 10% softer than Case B, from (d) to (f). When gas dissolution takes place in both reservoir, say causing a 10% impedance change, their 4D seismic response will be different as shown in (g) to (i). the baseline seismic of both case A and B are identical as seismic tells only the relative contracts between overburden and reservoir. However, given the same percentage of 4D changes, their monitor seismic will vary, therefore the 4D seismic difference will vary. 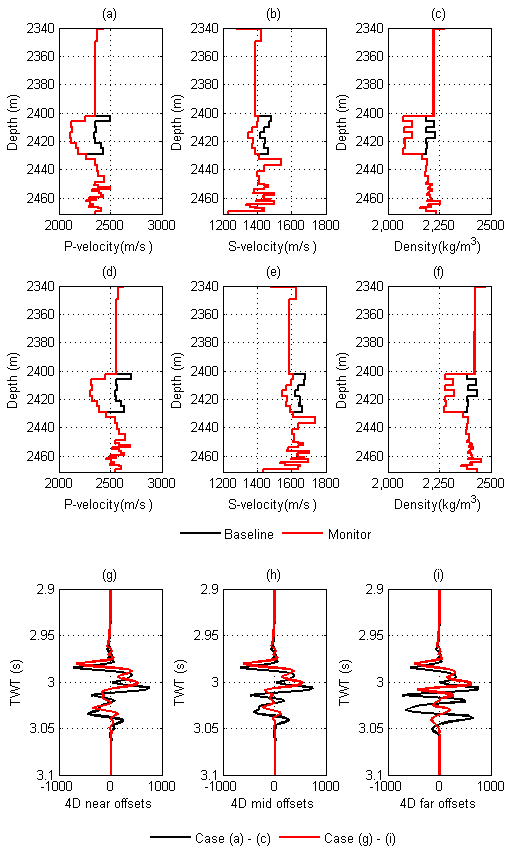 Figure A synthetic test of the impact of the baseline accuracy. (a) to (c) are the P-velocity, S-velocity, density values at the baseline (black) and the monitor (red) time. (d) to (f) represent the other case, in which the base numbers are 10% larger than (a) to (c).

Now we start doing the inversion. 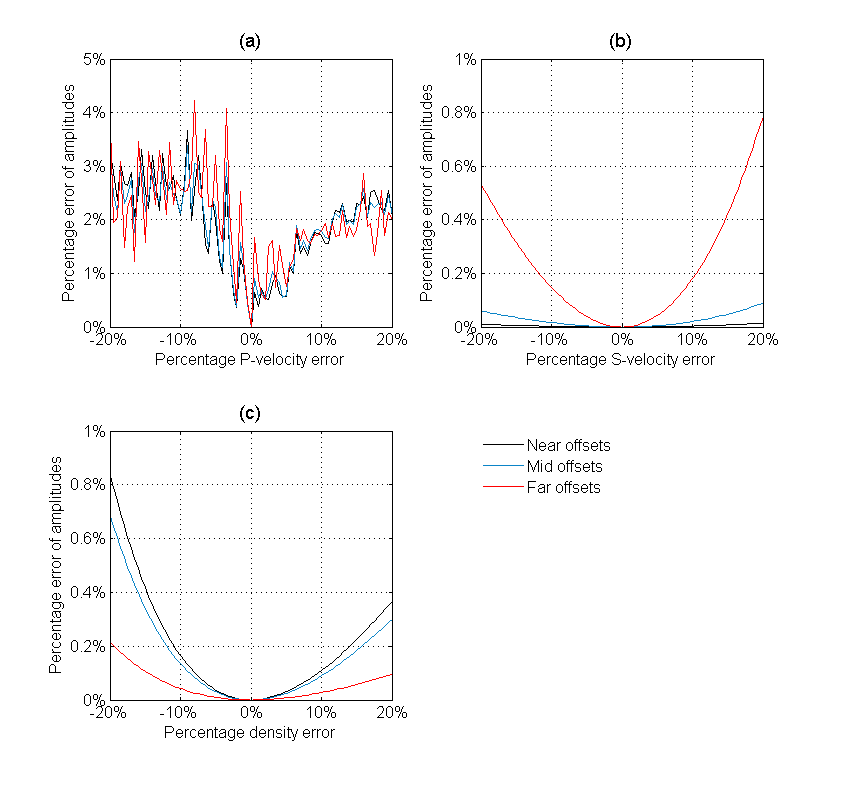 Figure A synthetic test of the 4D amplitude variation caused by inaccurate (a) P-velocity, (b) S-velocity and (c) density at near offsets (black), mid offsets (blue) and far offsets (red).

In the direct inversion of 4D difference, it can only back out the relative changes of the reservoir, therefore it cannot quantitatively differentiate if it is Case A or Case B.

How to implement a coupled inversion

At iRes-Geo, we promote an idea call bias cancellation coupled inversion. The workflow is shown as below. This time we invert baseline, and the results are used to couple with the monitor as an initial guess. More importantly, the baseline synthetics are perturbed and compared to the monitor synthetics to generate a true and comparable 4D difference. In this process, the baseline inversion error is forward propagated to the 4D monitor inversion in a Bayesian a priori term which is then further confined by the 4D amplitude data.

This set up results more robust SNR and well defined 4D signals, and have been well accepted by the top tier 4D players in various fields globally.

We recommend this to all subtle and noisy 4D signals. 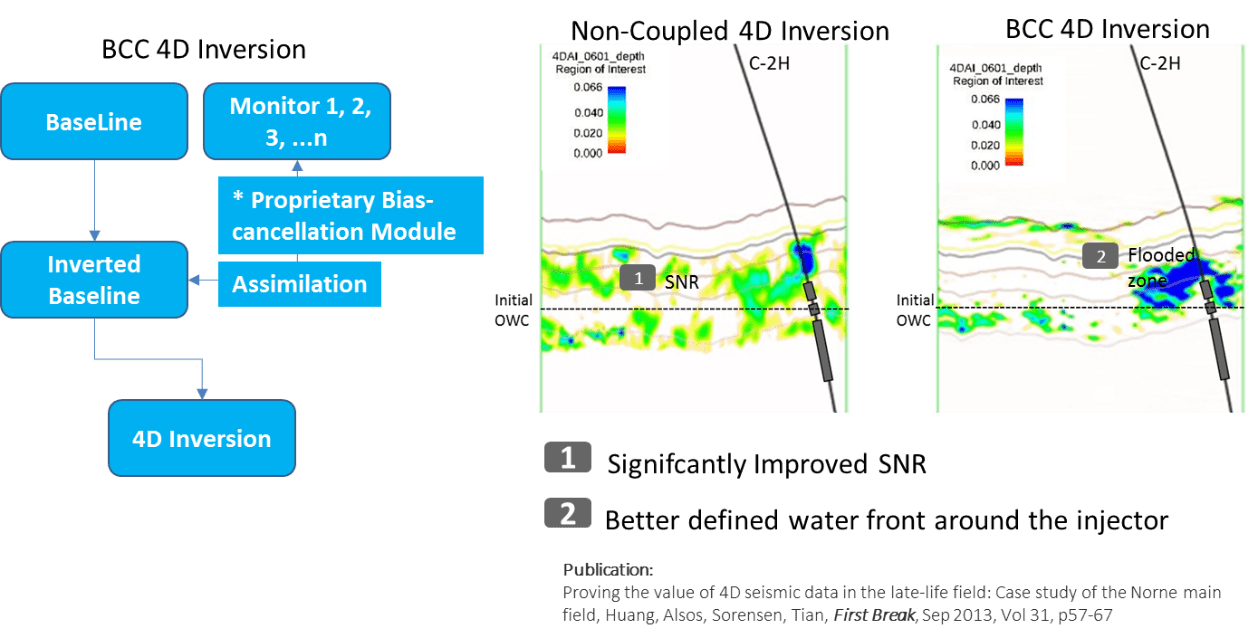 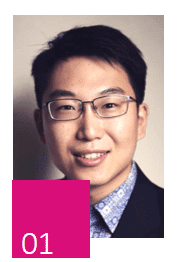 Dr. Sean Tian is a reservoir geophysicist by background, most known for his work in innovative 4D interpretation approaches. He received his M.Sc with Distinction in Petroleum Geoscience from Heriot-Watt University and has a Ph.D. in 4D reservoir geophysics from the world-class 4D research consortium Edinburgh Time-Lapse Project. He worked with Chevron, deploying 4D QI workflows before he joined iRes-Geo. As a leader in the field, he is managing lots of 4D projects and delivering practical 4D solutions to meet clients’ challenges.

4D Book of Knowledge Chapter VI – One chart to take away to plan your entire 4D work New Office Address!