There are a range of methods for acquiring 4D data which vary in cost and quality of the data acquired.  These include; repeat streamer surveys, temporarily installed ocean bottom cables (OBC / OBS) nodes or cables that are permanently installed for the lifetime of the reservoir (PRM).

Why the PRM approach?

4D involves at least two surveys; an initial baseline survey, and a subsequent monitor survey. The monitor survey is simply subtracted from the baseline survey.   Assuming acquisition parameters, (such as receiver locations), and data processing parameters have been kept constant, any differences between the two data sets are assumed to be attributable to changes in the reservoir; be they fluid movements, changes in saturation, subsidence or compaction etc.

Why is survey repeatability so important for 4D data? First and foremost, for top-of-the-range repeatability!

If the parameters between two 4D surveys vary, for example, a receiver’s location, then the frame of reference of each of the surveys will be slightly different, complicating the analysis of the two datasets.  In such instances, each survey will have a slightly different perspective, so subtracting one data set from the other will yield differences that either do not exist or mask or hide the real changes that are of interest.

Perhaps the easiest way to demonstrate this is with a high school parallax experiment Fig 1.  Hold your thumb out at arm’s length.  Then, without moving your thumb or head, look at your thumb with one eye closed and then swap eyes. Each time you swap eyes, your thumb’s apparent position changes, even though it has not moved. This demonstrates the sort of challenges faced when repeating seismic surveys on a time-lapse basis.

If parameters are not kept identical, artifacts will be introduced, and subtle changes missed. 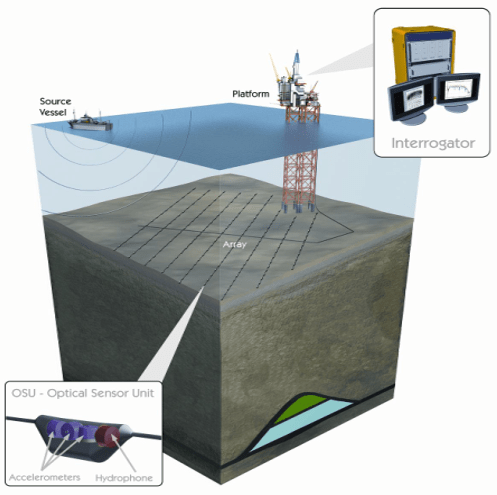 PRM solves many of these problems by permanently installing 4C receivers (Fig 2) on, or trenched into, the seabed above the reservoir, ensuring repeatability, allowing the measurement of the full wavefield and resulting in much improved signal / noise ratios.

Further advantages of placing sensors on the seabed are the ability to measure both P and S wave data.  In certain areas with seismic imaging difficulties, such as gas clouds, it can be the only way to measure and observe 4-D changes.

PRM is the 4D approach that produces the most repeatable and best seismic data. In addition, PRM not only provides seismic on demand, it can provide real time, passive data on a 24 / 7 basis.

What does PRM measure?

Pretty much anything that causes a change in acoustic impedance, or thickness, can be detected: Compaction, subsidence, density, velocity, temperature, production or injection related fluid changes (gas, steam, water, oil).

These data can be used to identify subtle changes in

that allow us to better understand the behaviour and responses of the reservoir.  These data reduce risk whether planning to shut in, or drill new, wells. The goal of which is fewer and better placed wells, so that more is produced with less.

One of the newer types of data gathering, still in its infancy but gaining traction, is micro-seismic or passive data.  Optical PRM system sensors are always live and feedback real time passive data, which offers insights into:

Micro seismic is real time data and provides direct feedback of how the reservoir is responding to production.  To take advantage of the full range of benefits offered through passive data requires the ability to react, in real time, so that appropriate actions can be taken before events become problematic.  Only cabled PRM systems can offer real-time 24/7 monitoring capabilities.

In mature areas, there is already significant broadband optical communication infrastructure in place allowing engineers and geoscientists to operate in real time from their desktops.

“In 2013, the UK mandated monitoring for fracking operations as a way of mitigating and preventing environmental hazards.  Since then all UK fracking operations are required to establish a baseline picture of seismicity and fault activity in the area prior to fracking starting.  Once operations start, real-time monitoring continues with a set of “traffic light” criteria, that determine when fracking can proceed, caution is required, or must be stopped.

After the 2010 Gulf of Mexico, Deepwater Horizon disaster, the US proposed mandatory monitoring legislation as a means of risk mitigation, although first time around it wasn’t passed.”

Passive data collection is still relatively new to the industry.  Its advantage is its real-time nature that allows us to listen to the reservoir and the “health” of surrounding infrastructure.  As industry gains more experience of working with passive data, new and novel uses will no doubt arise, leading to the development of tighter operational and risk mitigation practices (operational and environmental), which in turn will lead to wider adoption of passive data.  Similarly, increasing environmental concerns, as well as Governments legislating the use of monitoring, are likely to drive further growth in the use of this technology

The Reducing cost in PRM

Perhaps the largest hurdle to the wider adoption of PRM projects is the upfront cost. Costing in the range of US$50 Million – US$100 Million, a PRM project, if viewed in isolation as a one-off cost and compared with other monitoring approaches, such as towed streamer, OBC or OBN, PRM projects would certainly appear more expensive. 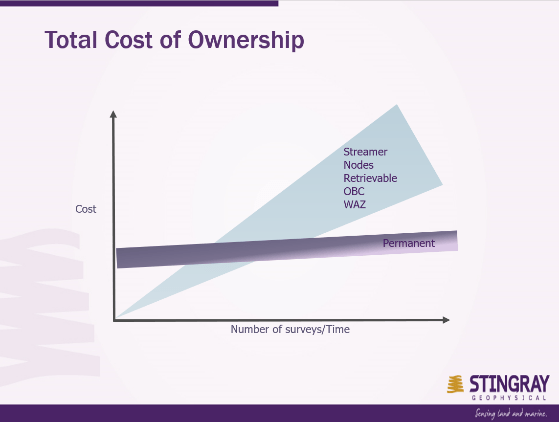 However, the purpose of reservoir monitoring is to repeat multiple surveys over the life of the field, to be able to monitor changes in the reservoir over time.   PRM systems with their installed cables allow very cheap repeat surveys (just shooting) as and when required.  Alternative 4D approaches limit the freedom of the operator to monitor at will, or in a fast, and inexpensive manner.  Unlike PRM each repeated survey will require planning, deployment, retrieval, and acquisition. Very quickly the cost of repeat surveys will add up, and in most cases, quickly exceed the cost of a PRM system (Fig 3).   PRM systems, with their better data, repeatability, real time capabilities and lower total cost of ownership are a cost-effective and valuable way of managing reservoir assets.

For some reason, maybe panic, or obligations, historically PRM projects have been considered as a way of breathing new life into mature reservoirs to extend production lifetimes.  If PRM projects are justifiable on mature fields, surely, PRM can be just as easily justified for new reservoirs which will have much longer production frames, from which to benefit. Fortunately, we are now starting to see PRM considered as an option for green field sites.  PRM’s are now being considered for Brazil’s prolific offshore fields and in Norway as part of development plans for new offshore fields expected to come on stream in the early to mid 2020’s

When deciding to move forward with a PRM system, operators are expecting systems that will operate trouble free, especially the subsea portion, for over 30 years.  Over this time frame maintaining optimal performance is critical and requires systems with high levels of reliability and sensors that produce repeatable and stable results throughout the reservoirs lifetime.  Optical systems are naturally suited to long term PRM installations. Sub sea optical arrays consist of optical sensors, with no moving parts, no electronics and no requirement for subsea high voltage cables, meaning they are inherently reliable.   Inherent long-term reliability and stability, immunity from electrical leakage and EM interference make optical systems the ideal solution for long term PRM deployment over mature or greenfield sites.

Over the lifetime of a field, PRM is certainly the lowest cost and superior option for monitoring your reservoir

Considering some of the earlier statistics concerning yields and the efficiency of production wells mentioned in this paper, clearly, there is a problem with how production operations have been done in the past.  These statistics suggest that by taking a less profligate and smarter approache, it is possible to extend the life of mature fields, reduce costs and maximise the yields of these finite resources.

Economic case histories of PRM installations are not readily available in the public domain.  At the Digital Energy Conference, Houston May 2008, a paper on the Valhall field (Foster, 2007 presented by Gerry Beaudoin, BP) indicated their experience with 4D showed the following benefits:

Subsequently, Caldwell (First Break volume 33, November 2015) made an analysis of possible ROI’s based on these numbers.  The results of which indicate 4D ROI’s ranging between 5 & 63% were achieved.   BP’s comment (indicated in the same article) to these numbers, was to say that the benefits had been well underestimated.

Whether production is during a high or low oil price environment, it makes sense to be efficient, get costs down and increase yields.  In addition, PRM can certainly help mitigate and reduce the impact production operations have on the environment.

Each reservoir is unique, and it may be that PRM is not needed, or not the only solution.  There are other options available, which may help, have a lower initial cost and modelling studies can help determine a suitable approach.  However, PRM offers the greatest benefits as indicated in the table below, which provides an overview of the different approaches available today.  4D may not always be appropriate due to the reservoir parameters and lack of 4D response, so planning and modelling should complement any PRM prospect.

PRM provides superior and richer data than is otherwise possible.  It provides the geoscientist with compressional and shear wave information, essential for better reservoir characterization and in some cases imaging.  In addition, PRM provides real time passive data which can be used both for operations and advanced hazard warnings.  Fig. 4 provides a summary of the benefits of the different 4D acquisition options.

There are many approaches to acquiring 4D data, but in many cases the ideal and most cost-effective approach will be PRM.  Once installed a PRM system provides both active and passive data, repeat acquisition cycles that can be tailored to the reservoir, thus providing an efficient tool for production and risk mitigation

PRM is the best 4D method for increasing yields and reducing costs.  With repeat acquisition cycles shrinking, the cost benefits, over alternative 4D approaches, are very quickly achieved. It is also the key to move onto a fully digitally managed oil field in the future.

David is the CEO of Stingray, a company he founded at the end of end of 2015.  He has 25+ years of experience in the oil and gas industry where most of his career has been spent in management positions successfully bringing hi-tech, innovative geophysical solutions to the Oil & Gas industry.

David holds an MSc from Imperial College, London and an MBA from the University of Edinburgh.